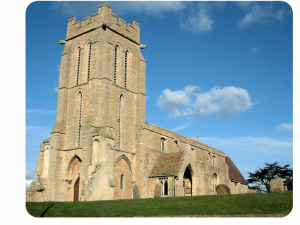 An early 12th-century church which stood here probably consisted only of a chancel and nave; the east and west walls of the nave of this church survive. Early in the 13th century the north aisle with its nave arcade was added and in the middle of the same century the western tower was built. Possibly owing to defects in the foundations, the north wall of the north aisle was rebuilt in the 14th century. About 1400, considerable alterations were again made, the chancel and south wall of the nave were rebuilt and new windows inserted in the north aisle. Towards the end of the 15th century, the large chapel west of the tower was built, possibly as a Lady Chapel. (img-1. 19) The chancel was shortened by about 13 ft., probably in the 16th century, as may be seen by the remains of two windows at the eastern angles of the church. The porch was built and the church restored in 1889.

The chancel has a modern east window of three lights. There is a re-set piscina on the south side of the window and in the north wall are two lockers, one over the other. The eastern window on the south side is of the 15th century, of two cinquefoiled lights under a quatrefoiled spandrel in a four-centred head. The western window on this side and that opposite to it are of the date of the rebuilding of about 1400. They are each of one cinquefoiled light which has been carried down below a transom to form a low-side window. In both cases the low-side window retains its shutter, but on the north side this has been plastered internally. The window on the north side has some glass contemporary with the rebuilding of about 1400 which consists of quarries and a border of crowns. Between the windows on the south side is a 15th-century doorway with a four-centred head. The chancel arch belongs to the early 12th-century church. It is semi-circular, of two bold moulded orders springing from half-round shafts with richly carved capitals and moulded bases. The 15th-century rood screen is of five bays. The open panels above have trefoiled ogee heads and the close panels below have cinquefoiled heads with carved foliated spandrels. The screen was formerly in a dilapidated condition and was repaired by the Rev. A. R. Pain with his own hands, after he was appointed to the living in 1845.

The north arcade of three bays is a good specimen of early 13th-century work. It has two-centred arches springing from octagonal piers with stiff-leaved capitals and moulded bases. The present windows were inserted in the south wall in the 15th century. The mid-13th-century arch of the south doorway was reset from the old wall. Beside it is a stoup which was found in rebuilding the bridge over the brook in the village in 1925. The clearstory, with its three windows on each side, was apparently added about 1400 when the south wall was built. The west doorway with the walls on either side also formed a part of the early 12th-century church. The arch is of three orders, the two outer of which have roll mouldings resting on jamb shafts with moulded bases and carved capitals. The doorway has a tympanum formed of square stones set diamondwise. The early 14thcentury lectern at the east end of the nave is a rare example of its kind. It is of oak, carved in the front with five trefoiled arches, at one side with a trefoiled ogee-headed opening and on the other with oak leaves. The desk has a design of foliage. The pulpit is modern. There is a considerable number of plain oak seats of early 16th-century date. There is an early 17th-century oak chest in the church.

Holy Cross church, Bury, has just three bells but one of them is very special. It is one of the oldest bells in the country still ringing. She was cast nearly 640 years ago round about 1380. But she is special for another reason: The bell is one of just 142 surviving Royal Head (RH) bells, out of 66,000 bells in the country. An RH bell has an image of a king or queen cast into it: It is probably Anne of Bohemia, queen of Richard II. Also, it has the words AVE MARIA either side of the head.

God the King of Glory,

Grant that we may minister to thy

Praise by ringing these bells to

sound the call to worship.

May we ourselves show forth thy Love,

Praise in all our words and deeds both in thy

house and in all our lives

Through Jesus Christ our Lord 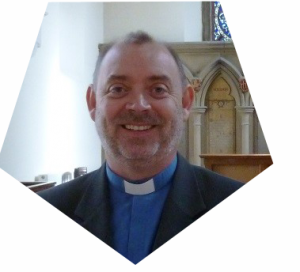 Garry is the Rector of the 4Parishes, Bury, Broughton, Wistow & Warboys.

Listen out for the jokes that precede the Sermon.

Here you will find the thread from the 4Parish Facebook Group it should list times of Services and other events when they are posted.

SIFT is a Christian charity seeking to bring hope to the poor of Nicaragua, Central America, through projects in health, education, and housing.